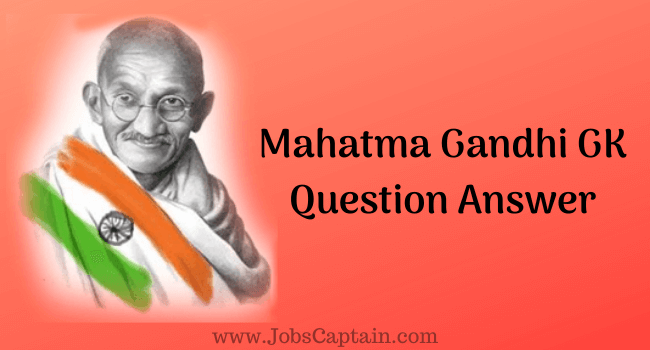 In this article, we are going to share the Best GK Questions and Answers on Mahatma Gandhi, that will be helpful in the preparation of competitive examinations such as Talati, Gpsc, Bin Sachivalay, SSC Clerk, UPSC (IAS, IPS, IFS) and Railways exam.

Mahatma Gandhi Jayanti is a national festival celebrated in India. Mohandas Karamchand Gandhi birth was on 2 October 1869. It is one of the three national holidays in India.

2. Who gave the name ‘Gurudev’ to Tagore?
Answer: Mahatma Gandhi

3. When did Gandhiji went to South Africa to practice law?
Answer: in 1893

4. When did Gandhiji returned to India from South Africa?
Answer: 9th January 1915.
(January 9 is observed as Pravasi Bharatiya Divas)

5. The period which is considered as the ‘Gandhian Era’ in the Indian Independence struggle?
Answer: 1915 – 1948

6. In which language Gandhiji wrote his Autobiography?
Answer: Gujarati

7. Who wrote the book “The words of Gandhi”?
Answer: Mahatma Gandhi

8. When was Gandhiji’s first imprisonment?
Answer: 1908 at Johannesberg in South Africa

9. In which railway station where Gandhiji was humiliated and ousted?
Answer: Peter Marits Burg Railway Station in SouthAfrica

10. When did Gandhiji started Tolstoy Farm (SouthAfrica)?
Answer: in 1910

11. Where is Wardha Ashram situated?
Answer: In Maharashtra

12. who is the author of “Great Soul: Mahatma Gandhi and his Struggle with India”
Answer: Joseph Lelyveld

13. Where did Gandhiji started the Phoenix Settlement?
Answer: Durban in South Africa

14. What is the name of weakly started by Gandhiji in SouthAfrica?
Answer: Indian opinion (1904)

15. Where was Gandhiji’s first satyagraha in India?
Answer: It was for the right of Indigo workers in Champaran in 1917

16. Where was Gandhiji’s first fast (Gandhiji’s second satyagraha in India)?
Answer: In Ahmadabad

17. Where did Gandhiji’s first Satyagraha experiment?
Answer: South Africa in 1906, September to protest against the Asiatic Ordinance issued against the Indians in Transvaal

21. When did Gandhiji started the weekly Harijan?
Answer: 1933

25. Who is a political guru of Gandhiji?
Answer: Gopal Krishna Gokhale

27. Who is known as Kenya Gandhi?
Answer: Jomo Kenyatta

28. Who started All India Harijan Samaj in 1932?
Answer: Mahatma Gandhi

29. When did Gandhiji assassinate?
Answer: 1948 January 30 by Nadhuram Vinayak Godse

33. Where was Gandhiji’s third satyagraha in India?
Answer: kheda satyagraha

34. What is the real name of Gandhi’s Autobiography?
Answer: Satya na prayogo

36. When did Autobiography of Gandhiji first published?
Answer: 1927 (in Navajeevan)

39. Who is considered the spiritual guru of Gandhiji?
Answer: Leo Tolstoy

40. Who was the secretary of Mahatma Gandhi after the demise of Mahadev Desai?
Answer: Pyarelal

41. What is the real name of Mira Behn, the disciple of Gandhiji?
Answer: Madeleine Slade

43. Who is known as Bihar Gandhi?
Answer: Dr. Rajendra Prasad

44. Who is known as Modern Gandhi?
Answer: Baba Amte

45. Who is known as Sri Lankan Gandhi?
Answer: A.T. Ariyaratne

46. Who is known as American Gandhi?
Answer: Martin Luther King

47. Who is known as Burmese Gandhi?
Answer: General Aung San

48. Who is known as African Gandhi?
Answer: Kenneth Kaunda

49. Who is known as South African Gandhi?
Answer: Nelson Mandela

50. Who is the writer of “Gandhi on Non-Violence”?
Answer: Thomas Merton

51. “The Life of Mahatma Gandhi” is written by?
Answer: Louis Fischer

52. Which Round table Conference was attended by Gandhiji?
Answer: Second

53. Second round table conference was held at which year?
Answer: 1931

54. Which is the Gandhiji’s first political agitation in India?
Answer: Champaran Satyagraha

55. Who is known as Indonesian Gandhi?
Answer: Ahmed Sukarno

Must Read, Mahatma Gandhi’s Last Days (You will CRY)

(‘Unto This Last is an essay and book on economy by John Ruskin. It was between August and December 1860 in the monthly journal Cornhill Magazine in four articles. Gandhi Ji was influenced by this book.)

2. Which of the following, according to Gandhiji, is an essential principle of Satyagraha?
Ans. Infinite capacity for suffering, Non-violence, Truth

( ‘Satyagraha’ is the most important weapon of Gandhi Ji. It emerged as a weapon of conflict resolution. Gandhi ji applied satyagraha in the non-violent struggle against exploitation, injustice and dictatorship.)

3. Gandhiji’s “The Story of My Experiments with Truth” was originally written in Gujarati. Who translated it into English?
Ans. Mahadev Desai

(Mahadev Desai was an activist of the Indian freedom movement. He is best known for his job of Mahatma Gandhi’s personal secretary. He died on 15 August 1942.)

4. Which one of the following books is the work of Gandhiji?
Ans. Hind Swaraj & My Experiments with Truth

(The Story of My Experiments with Truth is an autobiography of Gandhi Ji. This book covers the life of Gandhi ji from early childhood through to 1921. It was published in his journal Navjivan from 1925 to 1929.)

(Gandhi ji returned to India in 1915 permanently and joined the Indian National Congress with Gopal Krishna Gokhale as his mentor.)

7. Who was the political Guru of Mahatma Gandhi ji?
Ans. Gopal Krishna Gokhale

(Mahatma Gandhi used to seek the opinion of the Gopal Krishna Gokhale through letters from South Africa. Gokhale was the one who persuaded Gandhi to came back to India, invest time in understanding India and work for the Indian independence struggle movement.)

8. What was the name of the mother of Mahatma Gandhi?
Ans. Putlibai

9. Who called the ‘father of the nation’ to Gandhi Ji?
Ans. Subhash Chandra Bose

(Mahatma Gandhi was known as ‘the father of the nation’ but there is no legal backup for this title from the Government of India. Subhas Chandra Bose claimed Mahatma Gandhi as Rashtriyapita on a radio program in Singapore in 1944. )

10. When did Gandhiji take the vow of Brahmacharya or celibacy of life?
Ans. 1906

11. Who was the Private Secretary of Mahatma Gandhi?
Ans. Mahadev Desai

12. Who in South Africa gave Gandhiji ‘Unto This Last’ to read which proved to be one of the most decisive books of his life?
Ans. H S Polak

13. To put the ideas of ‘Unto This Last’ into practice, Gandhiji founded the Phoenix Settlement near Durban which came into being in the middle of the year
Ans. 1904

14. Who described Gandhi’s march to Dandi in the following words? “Like the historic march of Ramchandra to Lanka, the march of Gandhi will be memorable”
Ans. Motilal Nehru

15. The historic August session of the All-India Congress Committee, at which the Quit India Resolution was passed, was held at Gowali Park in _________.
Ans. Bombay

16. Gandhiji accorded very high priority to communal harmony in his programme of actions. At which place did he undertake his last fast for it on January 13, 1948?
Ans. Delhi

17. Which of the following did Gandhiji describe as his two lungs?
Ans. Ahimsa and truth

18. The differences with Gandhiji led Subhas Chandra Bose to resign the Presidentship of the India National Congress in 1939. Leaving the Congress he formed a new party called ___________.
Ans. Freedom Bloc

We hope that you like to read all these questions and answers on Mahatma Gandhi. As you can see here we covered most of the questions on Gandhiji.