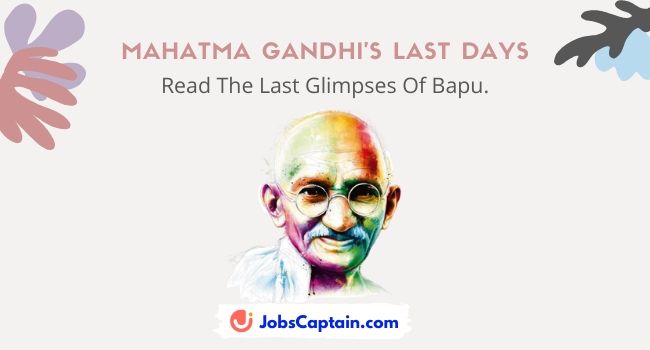 On January 30, 2021, the Nation observed Gandhiji’s 73rd death anniversary. With the death of Mahatma – the Father of Nation, the glory of the nation had departed. As the then Prime Minister Jawaharlal Nehru said in his broadcast on All the India Radio:

The light has gone out of our lives and there is darkness everywhere. Our beloved leader, Bapu as we called him, the Father of our Nation, is no more.

We present here the events leading up to the assassination of Mahatma Gandhi.

As many Hindu, Muslim and Sikh refugees dragged each other out of trains and killed one another, Mahatma Gandhiji began an indefinite fast — the last fast of his life.

Due to the fast, Gandhiji’s health deteriorated. He had no strength to walk or even sit up unsupported. But Gandhiji was firm. He said, “Do not be worried on my account. He who is born in this world cannot escape death.” The doctors came to the conclusion that Gandhiji could not survive on his fast for more than 72 hours. His weight was just 107 pounds.

Despite his critical state, Gandhiji’s mind remained crystal clear. He dictated to his secretary Pyarelal Nayar a seven-point charter of the conditions he wished fulfilled if he was to end his fast.

That night Gandhiji’s condition was very serious. His pulse was weak and irregular. Gandhiji was asleep when Pyarelal Nayar came in and shook Gandhiji’s shoulders and then showed him the charter the Peace Committee signed. But Gandhiji was not satisfied as it lacked signatures of two leaders of the Hindu Mahasabha and the RSS and said that he will not break the fast till everyone signed it.

After Rajendra Prasad showed Gandhiji the charter signed by all the leaders and getting confirmation from the leaders themselves that they swear fully to carry out his commandments, Gandhiji took his first sip. At the age of 78, Mohandas Gandhi accepted his first nourishment after existing for 121 hours and 30 minutes on lukewarm water and bicarbonate soda. Maulana Azad, a Muslim, took the glass of orange juice with glucose in his hands and raised it to Gandhiji’s lips.

Gandhiji was very happy as he got the most important news that Jinnah has softened his stand and has finally agreed to welcome his old political foe to the soil of Pakistan. The decision aroused a soaring sense of purpose and vigour in Mahatma Gandhi. He was very keen to go to Pakistan.

The murder of Gandhiji was a brainchild of Narayan Apte, a Hindu fundamentalist who published the newspaper Hindu Rashtra from Pune. Apte had decided to hide the time bomb against the outside edge of the brick wall behind the Birla House near the prayer gathering. The explosion would create panic in the public and this world give them the chance to assassinate the Mahatma. And then at that point Digamber Badge, a petty arms trafficker, would open fire on Gandhiji from almost point-blank range.

There was some chaos in the killers’ plan. On the prayer ground, Gandhiji was speaking to the crowd. His voice was so weak that Sushila Nayyar had to repeat each phrase he told to the crowd. And when Sushila was repeating “If we cling to the excellent decision taken with God as our witness, we shall rise to a much higher moral plane…”, the time bomb was exploded by Madanlal Pohwa. It created confusion among the crowd and Gandhiji was pleading to the crowd to be calm and settle down and was saying that the explosion is just the army having some practice. At the last moment, Badge had no intention to open a fire at Gandhiji as he thought that his business was to sell the arms and not to use them. Avoiding his group’s attention, he disappeared in the crowd.

Madanlal was arrested as one woman had seen him lighting the bomb and she pointed him out to an air force army. The other members of the conspiracy were dejected by their failure and decided to get away from the ground as fast as they could. By this time everything was settled on the prayer ground. Gandhiji expressed his views that, “I may start for Pakistan now. If the government and doctors permit me, I can start immediately.”

On the other side, the police were interrogating Madanlal where they got some important clues like there was a group of seven members who were involved in the plot to kill Gandhiji and the description of Godse that he was an editor of Rashtriya or Agrani Marhatta language newspaper. By this time the other killers had already fled and were on their way to Poona. After January 20, the security around Gandhiji was tightened.

D.W. Mehra, a Delhi police officer, was given the responsibility of Gandhiji’s protection. But Gandhiji refused to have any protection at the prayer ground and said, “Rama (Lord Rama) is my only protection, if He wants to end my life, nobody can save me, even if a million of your policemen were posted here to guard me.” But the officer convinced Gandhiji that he would be personally present in all his prayers in civilian dress.

Madanlal Pohwa’s 54-page confession was ready and signed by him. In his confession he had mentioned Godse and Apte’s paper Hindu Rashtriya and that it is located in Poona. But the Delhi police were very slow in their action. On the other hand, the killers were planning to get Gandhi before the police got hold of them.

Nathuram Godse, Narayan Apte and Karkare fixed 5 pm on January 30, to assassinate Gandhiji at the same place, Birla House, where their first attempt had failed. And it was decided that it will be Godse who would kill the Mahatma.

Gandhiji spent the whole evening in finishing what was his last article. The article outlined Gandhi’s vision of India’s future. He had outlined a new constitution for the Congress Party. Gandhiji had said that Congress must disband itself and change into the Lok Sevak Sangh (LSS). He also expressed his hope that the Congress, which he said was irrelevant as a political force in new India, would give 700,000 villages moral, economic and social independence. For achieving this goal, Congress would have to withdraw itself from the power. At 9.15 pm, the article was finished and Bapu sat with his devoted disciples to chat.

Before sleeping Bapu told Manu that, “if an explosion took place as it did last week, or somebody shot at me and I received his bullet on my bare chest without a sigh and with Rama’s name on my lips, only then should you say I was a true Mahatma. This will benefit the Indian people.”

The last day of Gandhiji’s life. Gandhiji handed over the LSS draft to Pyarelal Nayyar to go through as he had written under tension and maybe there were some mistakes.

Gandhiji weighed 109 pounds. He had gained two pounds since he finished his last fast 12 days ago but was still suffering from a terrible cough.

Gandhiji began his Bangla lesson. During his Noakhali visit in 1946, he had started learning Bangla.

Meanwhile, the killers were giving final shape to their conspiracy to assassinate the Mahatma. Nathuram Godse came up with a idea to go to the prayer ground wearing a black shawl and with an old-styled camera so that he could shoot Gandhiji while pretending to take a picture. They went down on the street to search for a camera but then they came to a conclusion that the plan was bad as hardly anyone used the old-styled cameras any longer.

Then they come up with the idea of buying a burqa and that Godse would pretend to be burqa-clad Muslim woman and thus could get in for a close shot. They bought the burqa but Nathuram found it very uneasy when he wore it. He thought firing from under might lead him to miss the target. So even this idea was dropped.

Finally Narayan Apte came with a simple but deadly plan. They decided that Nathuram should wear a loose and long shirt so that he can hide his pistol in the pocket of his trousers and so went to the market and purchased it.

At Birla House, Gandhiji was meeting many visitors. But the most important meeting was yet to take place. A meeting which would save a split in Congress and which would bridge the differences between his two disciples Nehru and Patel. Gandhiji had convinced Vallabhai Patel to withhold his resignation and that three of them (Gandhiji, Home Minister Vallabhai Patel and Prime Minister Jawaharlal Nehru) would sit down together and thrash out the differences.

While Gandhiji was talking to Vallabhai Patel to avoid the split, Abha, came with his evening meal of goat’s milk, boiled vegetable and orange juice. After his meal, he sat on his spinning wheel, still talking to Patel. Nearby, the killers were wandering in the gardens beyond the room where Gandhiji turned his wheel.

Gandhiji was late for his prayer. Abha and Manu were scared to interfere in their conversation but finally Manu gestured at his watch. Gandhiji glanced at his old watch and said to Patel, “It’s time for me to go God’s meeting”. With Abha and Manu, his two great grand-nieces and walking sticks, Gandhiji went towards the prayer ground. Gandhiji was upset for the delay and said to them, “You are my watches, why should I consult a watch? I do not like this delay at all. I cannot tolerate even one minute’s delay for prayers.”

Godse was nervous but determined to accomplish his task. Manu saw an advancing stout young man in a khaki dress. Godse took the pistol from his pocket and bowed to touch Gandhiji’s feet. Manu thought he wanted to touch Gandhiji’s feet, and so she gently came in the way and murmured, “Brother, Bapu is already ten minutes late”. At that instant, Godse pushed Manu aside and before she could recover, he pulled the trigger three times. All the three bullets passed through the slender body of Gandhiji. The idol of non-violence could only gasp, “He Ram!” before slumping on the ground. It was 5.17 pm January 30, 1948.

When the news of the assassination of the Mahatma reached Louis Mountbatten, his first reaction was, Who did it? He told Campbell-Johnson that if it really was a Muslim, India was going to live one of the most ghastly massacres the world would ever see.

An All India radio broadcast simply said: “Mahatma Gandhi was assassinated in New Delhi at twenty past five this afternoon. His assassin was a Hindu.” The last sentence was included on order from Lord Mountbatten . With this, the slaughter had been avoided and it now remained to India to mourn.

“Generations to come will scarce believe that such a man as this, in flesh and blood, ever walked upon this earth.”

Thank you for reading article on Mahatma Gandhi’s Last Days. If you have more valuable information on Bapu, please do comment below.