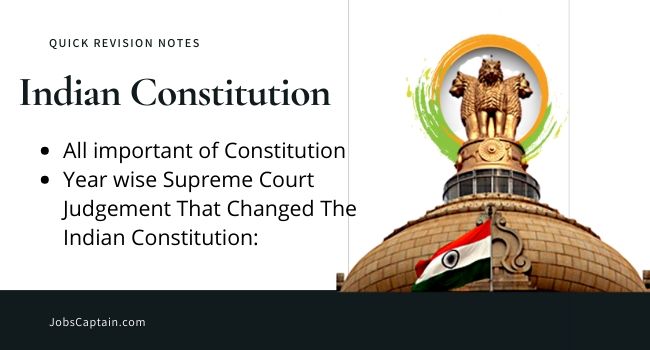 Fundamental Right of Equality provides for:

The important free­doms granted are:

The Right to Consti­tutional Remedies is provided under Article 32.

The Constitution provides that High Courts and the Supreme Court can issue various writs (written orders) to safeguard the freedom of an individual.

There are five types of writs:

Dr Ambedkar has called this article as “soul” of the Constitution.

Directive Principles of State Policy act as guide­lines or morals for the gov­ernment. They are contained in Part IV of the Constitu­tion. They were borrowed from Ireland. Some impor­tant directive principles are:

The Vice President is the Chairman of the Rajya Sabha. However, he is not a member of any House.

If a member is found sitting in another House of Parliament, of which he is not a member, he has to pay a fine of Rs 5000.

Rajya Sabha has 250 members—238 elected and 12 nominated by the Presi­dent. Uttar Pradesh elects a maximum number of mem­bers for the Rajya Sabha (34), followed by Bihar (22) and Maharashtra (19).

In one year time, the President must hold at least two meetings of the Rajya Sabha.

If a state of Emer­gency is declared, the Lok Sabha is dissolved, but not the Rajya Sabha (It is a per­manent House).

Lok Sabha has 547 members—545 elected and 2 nominated from the Anglo-Indian Community.

During a state of emergency, the tenure of Lok Sabha can be extended by a maximum of one year.

A maximum number of members of Lok Sabha are elected from Uttar Pradesh (80 members), followed by Bihar (54) and Maharashtra (48).

The minimum age for becoming a member of Lok Sabha is 25 years and Rajya Sabha is 30 years.

The minimum age to be eligible for the post of President is 35 years.

The President is elected by members of both Houses of Parliament and State Legislative Assemblies.

The Vice President is elected by all members of the Parliament.

To discuss an impor­tant topic, the normal proce­dure of the Parliament is stopped under the Adjourn­ment motion.

A decision about whe­ther a Bill is a Money Bill or not is taken by the Lok Sabha Speaker.

The process for removal of the Comptroller and Auditor General of India is same as that of judges of the Supreme Court.

Attorney General is the law expert for the govern­ment. He can participate and speak in both Houses of Par­liament but is not allowed to vote.

The idea of having a Lokpal to check corruption at the highest level has been borrowed from the “Ombuds­man” of Sweden. In the States, we have the Lok Ayuk­ta.

There are three types of Emergencies that can be proclaimed by the President. Emergency under Article 352—due to war or internal rebellion. (Implemented three times (1962, 71, 75).)

To gain the status of a National Party, a political party must be recognized in four or more States, attaining at least 4% votes on a national scale and 9% in each State.

The flag of the Con­gress party was accepted as the National Flag (with few changes) on July 22, 1947.

The new Flag Code of India gives freedom to individuals to hoist the flag on all days, but with due respect to the flag.

The first leader of the Opposition was Ram Subhag Singh, in 1969.

Although the Parlia­ment can pass impeachment motions against judges, their conduct cannot be discussed by it.

There are at present 18 High Courts in India.

The Indian Consti­tution was the first of the preceding two centuries which was not imposed by an imperial power but was made by the people them­selves, through representa­tives in a Constituent Assembly.

The Preamble of the Indian Constitution is not enforceable in a court of law. It states the objects that the Constitution seeks to establish.

The Indian Constitu­tion endows the Judiciary with the power of declaring a law as unconstitutional if it is beyond the competence of the Legislature according to the distribution of powers provided by the Constitu­tion, or if it is in contraven­tion of the fundamental rights or of any other mandatory provision, e.g. Articles 286, 299, 301 and 304.|
[You are reading Indian Constitution – Quick Revision Notes]

As part of the inte­gration of various Indian States into the Dominion of India a three-fold process of integration, known as the Patel Scheme, was imple­mented:

At the time of acces­sion to the Dominion of India, the States had acceded only on three subjects (Defence, Foreign Affairs and Communications). Lat­er, revised Instruments of Accession were signed by which all States acceded in respect of all matters includ­ed in Union and Concurrent Lists, except only those relat­ing to taxation.

The process of inte­gration culminated in the Constitution (7th Amend­ment) Act, 1956, which the abol­ished Part B States as a class and included all the States in Part A and B in one list.

Thank you for reading Indian Constitution Revision Notes. The next topic is much important for the civil services examination.

Read below Important Supreme Court Judgements for the UPSC exam.

Thank you for reading “Indian Constitution Quick Revision Notes”. If you want more revision notes on any subject, do comment below.