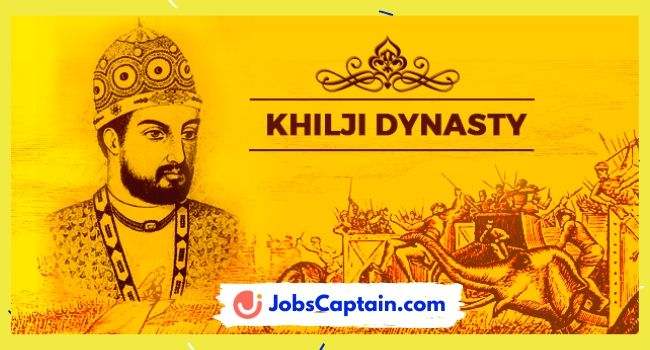 Jalaluddin Khalji established Khilji Dynasty. The founder of the Turkish dynasty, Jalaluddin Khalji was seventy when he ascended the throne. He defeated the descendants of Balban, being victorious came to power. He was kind-hearted, mild and trusting in nature.

The most important event during the reign of Aladdin was the attack on the Yadava city of Devagiri. The march into the Deccan was organized by ambitious Alauddin, his son-in-law, and nephew. Alauddin defeated Raja Ramachandran and returned to Delhi with enormous gold and wealth.

The delighted Jalaluddin embraced Alauddin, at whose behest the old sultan was beheaded. He became the new ruler of Delhi in 1296. To safeguard his throne he assassinated the supporters and nobles of the former sultan. Alauddin was a cruel, brilliant general, and an able administrator.

In the initial years of Sultans reign, there were frequent Mongol incursions. The one in the year 1299 was most dreadful. Under the leadership of Qutbul Khwaja (Kutbugh Khwaja), mongols were very strong and keen to conquer Delhi. Alaluddins successful warrior in previous raids, Zafar Khan was killed in his desperate actions against mongol. The courageous Alaluddin gathered his army and proceeded with the attack.

It was to a great surprise that Sultan defeated mongol. In spite of the defeat the mongols continued with their raids for some years. But they were held off by various measures. All the forts on their route were repaired and made stronger. Best of the generals were placed at the frontier provinces.

Those mongols who accepted Islam, fought in the army and settled near Delhi at the time of Jalaluddin were mercilessly massacred. Alauddin suspecting a possible rebellion demanded that in one night all should be rounded and killed. Despite the fact that they were 20,000 to 30,000 in number.

The strict measures enabled sultan to build a large great army to rebel back mangols. In the last mongol raid they were badly defeated on the banks of River Ravi.

Sultan waged war on the ruler of Ranthambhor Hamir Deva under the pretext of protecting mongols. Sultan’s army had to retreat as the soldiers of Ranthombhor offered strong assistance. After a year long siege, Alauddin captured Rajput fort and marched into Mewar the Premier State of Rajasthan.

The attention of Alauddin was drawn to Chittor because of the beautiful wife of Rana Ratan Singh, Princess Padmini. Alauddin became a passionate suitor for her hand. Gora and Badal were the two gallant Rajput heroes who defended Chitor. But Chitor fell at the hands of Alauddin. The Sultan rode into Chitor to find the gallant Queen Padmini burnt to death.

Alauddin was first Muslim King to think of establishing Delhi rule over the Deccan. It was the physical feature of the country which made northern Indian rulers hesitant to conquer the Deccan. Alauddin’s general Malik Kafur led successful expeditions between 1307 and 1311.

The strong army turned cities into stables. The Yadava King of Devagiri, the Kakatiya ruler of Warangal, the Hoysalas of Dorasamudra, Madwa the centre of Pandhya territory were attacked and looted. He even reached Southern most tip of India Capa Conorin. Kafur returned with untold riches-gold, precious stones, horses. The defeated rulers were obliged to pay heavy tributes. Thus, the whole of India was under the Sultan of Delhi.

Alauddin strictly kept politics separate from religion. Unlike other muslim rulers, he did not allow the religious heads to interfere with kingship. He brought nobles under his control and abolished the system of granting jagirs. Similarly he confiscated the jagirs given in earlier times. He reduced and stabilized the prices of commodities. Prices were fixed by the government and agents were employed to see that the traders did not overcharge the customers.

Alauddin patronised the art. He invited masters and experts in arts to his court. The Persian poet Amir Khusru lived at his court. Likewise, one of the monuments Alai Darwaza a massive gateway was build in front of Qutwat-ul-Islam mosque.

Alauddin died in 1316. After him, for a month Malik Kafur ruled. He was replaced by Qutb-ud-din Mubarak, son of Alauddin. He ruled till 1320 A.D. Although he was killed by his noble. There was blood-hit violence, which was put to an end by the governor of Punjab. Thus a new dynasty was established.

Thank you for reading the article on “Khilji Dynasty”. If you have more information regarding Khilji Dynasty, please provide it to us, do comment below.

4 thoughts on “Khilji Dynasty : A Complete Overview Sultanate of Delhi”