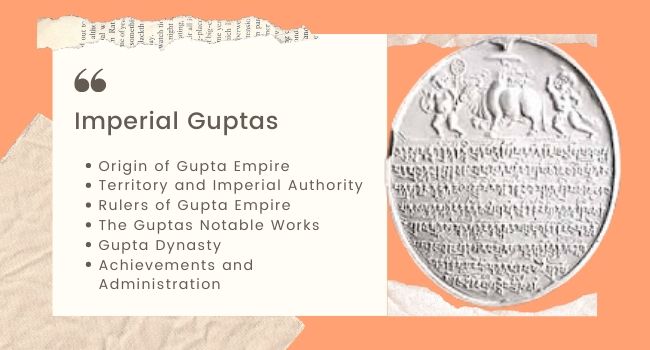 In this, You read about the origin of Gupta Empire pdf, Territory and Imperial Authority, Rulers of Gupta Empire, The Imperial Guptas Times Notable Works, Gupta Dynasty, Achievements and Administrations.

Content Index show
The Imperial Guptas History
Important Scholars/Works of The Period Are:

Ashoka’s death left a vacu­um in India for the next 600 years, during which, several foreign tribes overran India. With the ascent of the Gupta power, the northern States were merged into a single empire. This national revival yielded an excellent administration and trade, all-round development with prevailing order and peace. The tax-burden was low compared to the Mauryan rule and the State provided for safe roads for trade. The period saw the revival of religion, sanskrit literature, art and architecture too.

After the Mauryas, the two main powers were the Satavahanas in the Dec­can and the Kushanas in the north. They carried on brisk trade with the Roman empire. These powers were replaced in the middle of the 3rd century A.D. by the Gup­tas. The Guptas were Vaishyas by caste and followed Vaishnavism.

Sri Gupta and his son Ghatotkacha Gupta were the first definite rulers of this dynasty, who also used the term ‘Maharaja’. However, no definite place is assigned to them over which they ruled.

Chandragupta-I is considered “real founder”. He started the Gupta Era (320 A.D.). His marriage alliance with the Licchavi (North Bihar) princess Kumaradevi enhanced his status and he ruled over Oudh, Magadh and Prayag.

Samudra Gupta’s campaigns have been men­tioned by his court poet Harisena in the Prayag Prasasti, which is a valuable source of information for the various States, tribes and their rulers. His victory over the Nagas, Hunas, Vakatakas, etc gave him the title of “Indian Napoleon” (for his conquests), especial­ly the Vakataka ruler Pravarasena (of Berar, Dec­can) and Tamralipti (Bengal).

The Guptas were sec­ular rulers and offered reli­gious freedom to the society.

Chandra Gupta-II (“Vikramaditya”) defeated his elder brother Ramagupta and the Saka chief Basana, because Ramagupta had agreed to offer his wife Dhruvadevi to save the kingdom from Basana. To strengthen his position fur­ther, he married his daugh­ter Prabhadevi, by his wife Kuber Naga, to the Vakataka king Rudrasena II. The Vakatakas helped him to end the power of the Sakas of Western India.

Vikramaditya is iden­tified with king Chandra of the iron pillar inscription near Qutab Minar, Delhi. The reign of Vikrama­ditya also saw the visit of the Chinese monk Fahien, who wanted to secure some copies of Buddhist manuscripts from India.

Skanda Gupta is famous for saving the empire from the Huna tribe, which had overran Asia and Europe. They suffered a ter­rible defeat in India.

Skanda Gupta appointed Parnadatta as governor to the Sakas at Saurashtra. The famous Junagarh rock inscription in Girnar hills, Kathiawar, refers to the repair of the embank­ment of the Sudarshan Lake by Parnadatta and his son Chakrapalita.

Gupta coins were first issued by Samudra Gupta, as the golden “Dinara”. He also issued Chandragupta and Kumaradevi type coins to commemorate his father’s marriage to the Liccha­vi princess.

The first silver coins were issued by Chandragup­ta-II, in imitation of the Western Satraps. Copper coins were also issued.

Brahmanical faith, which had been eclipsed for long by the new sects of Buddhism and Jainism, achieved immense splen­dour under the Vaishnavite Guptas, who also encour­aged to revive the use of Sans­krit.

Devi worship in var­ious forms achieved impor­tance during Gupta period. Lakshmi was worshipped as consort to Vishnu and Parvati to Shiva.

The emergence of Bhakti cult, stressing on worship, devotion and love towards a personal God, gained impor­tance during the Gupta period.

Important Scholars/Works of The Period Are:

Nalanda (Rajagriha, Bihar) was founded by Kumaragupta (A.D. 450) and was famous for its tests. There was free education. It had 10,000 students, 1,500 teachers and 300 class­rooms, a big three-storeyed library. Huen Tsang who came later, during Harsha, studied here for five years. Itsing (A.D. 675) records a donation by Sri Gupta, for the University.

In sculpture, purely indigenous patterns were adopted—instead of the Kushana period Buddha with shaven head, we have the Buddha with curly hair now, and transparent drap­ery was used along with var­ious mudras (postures). The main centres were Sarnath (Benaras), Mathura, Pataliputra (Patna).

Some famous sculp­tures of Gupta period are:

The art of painting reached its zenith during the Gupta period and is mani­fested at Bagh caves (Gwalior, M.P.) and Ajanta caves (Maharashtra).

Aryabhatta—math­ematician and astronomer of Gupta period—wrote Arya­bhattiya and Surya Sid­dhanta. He explained the eclipses, shape of earth, its rotation and revolution and gave important results in maths too.

The provinces were divided into vishyas, under the charge of Vishyapatis. The lowest division (village) was under the gramika (village headman).

The land was properly classified into kshetra (cul­tivable), khila (wasteland), donations for brahmins (agrahara grants), donations for religious purposes (Devagrahara land grants) and so on.

The land revenue system was put in charge of Dhruvadhikaranika. The pustapala was an officer specially appointed to record various land transac­tions.

The receivers of land grants had the right to enjoy land revenue from the farm­ers. They could even punish and try thieves. Thus, there was serfdom (forced work) and oppression of the peasantry.

There were two classes of merchants—set­tled (sresthi) and caravan traders (Sarthavaha). The group of merchants called as “puga” constituted the advi­sory council in cities. Its president was the Nagar­sresthi. Town mayor was called Purupala.

The Srenis (traders unions or guilds) had immense powers. Not only did they perform economic functions but also judicial and executive ones. Some of them even issued seals and coins and had their own militia (called Srenibala, in the Kalachuri inscriptions).

Narada and Brihas­pati smritis lay down the rules for merchants. The nor­mal rate of interest was 15% per annum.

The most important metal of the Gupta age was iron.

The blacksmith acquired the second most important place in the vil­lage economy. The iron pillar (of Chandra Gupta-II) is a fine example of ironworkers of the Gupta period.

The term golden age can be applied mainly for the economically upper classes, and that too in Northern India only. Though art and architecture flour­ished, it was confined as a “State art”. There was flour­ishing trade with the south­east, but, on the whole, there was a decline of trade centres and towns. Sanskrit literature, undoubtedly, made im­mense progress, but it was more of a state language, limited to the learned ones.

The caste system became rigid during this period. Manu, for instance, had put several restrictions on the woman and the shu­dras. In no way was the tax burden on the common man low. The flourishing mon­ey—economy during their predecessors (Kushanas and Satvahanas)—also slowly broke down. Fashion men­tions use of “cowries” (shells) as the “common medium of exchange”, indi­cating shortage of coins.