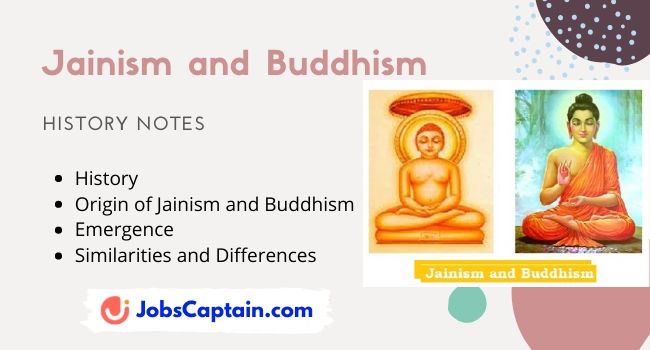 History of Jainism and Buddhism

Parents of Mahavira were Siddhartha, a Janatrika chief of Kunda­pura, and Trishala, a Ksha­triya lady related to the ruling families of Vaishali and Magadha.

Mahavira forsook the world at the age of thirty and roamed as a naked ascetic in several parts of eastern India and practiced severe penance for 12 years. Half of this time was spent with a mendicant (beggar) friar (brother) named Goshala who subse­quently left him and became the leader of the Ajivika sect.

In the 13th year of penance, Mahavira attained the highest spiritual knowl­edge called Kevala-jnana, on the northern bank of river Rijupalika, outside Jrimb­hikagrama, a little known locality in eastern India. He was now known as a Kevalin (omniscient), a Jina (conqueror) and Mahavira (the great hero).

Mahavira became the head of a sect called Nigranthas (free from Fret­ters), known in later times as Jains or followers of Jina (conqueror).

Mahavira died at Pava in south Bihar, after wandering for 35 years as a religious teacher, at the age of 72.

The Jains believe that Mahavira was not the founder of a new religious sys­tem, but the last of a long succession of 24 Tirthankars or “ford-makers across the stream of existence”.

The 23rd teacher, Parsav, the immediate pre­decessor of Mahavira, was a prince of Benaras and enjoined on his disciples the great four vows of non-injury, truthfulness, abstention from stealing and non-attachment. Mahavira added the vow of Brahmacharya or continence to this.

Jainism was in nature, the existence of God being irrelevant to its doctrine. It believes that uni­verse functions according to an eternal law and is contin­ually passing through a series of cosmic waves of progress and decline. Every­thing in the universe, mate­rial or otherwise, has a soul. The purification of the soul is the purpose of living, for the pure soul is released from the body and then resides in bliss.

Jains believe that by following the three-fold path of Right Belief, Right Knowledge and right Con­duct, souls will be released from transmigration and reach the pure and blissful abode or Siddha Sila.

Jainism spread rapidly among the trading community. The emphasis on non-violence prevented agricul­turists from being Jainas since cultivation involved killing insects and pests.

According to the tra­dition of the Svetambara Jains, the original doctrine taught by Mahavira has contained in fourteen old texts styled Purvas.

Close to 4th century B.C., due to a famine in south Bihar, important sec­tions of Jains, headed by Bhadrabahu, fled to Mysore.

To revive the knowl­edge of sacred texts, which was passing into oblivion following the famine in south Bihar and fleeing of the majority of Jains, a council was convoked by those who were left behind in Patalipu­tra, which resulted in compi­lation of the 12 Angas which are regarded as the most impor­tant part of the Jain canon. Another council was held at Valabhi in Gujarat in 5th or 6th century A.D. which made a final collection of the scriptures and reduced them to writing.

The followers of Bhadrabahu, on their return to the north, refused to acknowledge the Angas and came to be known as Sve­tambaras (clad in white) as they wore white garments notwithstanding the injunc­tions of Mahavira. The origi­nal followers came to be called Digambaras (sky-clad or naked).

Gautama Buddha was born as Siddhartha to Suddhodana, a Raja or noble of Kapilvastu (in the Nepal Terai to the north of Basti district of Uttar Pradesh) and Maya, a princess of Devadaha, a small town in the Sakya territory. Maya died while giving birth to Sid­dhartha and he was brought up by his aunt and step-mother Prajapati Gautami.

The site of nativity of Gautama Buddha is marked by the celebrated Rummindei Pillar of Ashoka.

The Great Renunci­ation took place when Sid­hartha reached the age of 29. For six years he lived as a homeless ascetic. At Uruvila he practiced the most rigid austerities only to find that they were of no help to him to achieve his goal.

Sidhartha finally sat under a pipal or Banyan tree at modern Bodh Gaya, after taking a bath in the stream of river Nairanjana, modern Lilajan. Here he attained the supreme knowledge and insight and became known as Buddha or the Enlight­ened One, Tathagata (“he who attained the truth”) and Sakyamuni or the sage of the Sakya clan.

The first sermon by Buddha was given in the Deer Park near Sarnath, in the neighbourhood of Benaras. This sermon was called the Turning of the Wheel of Law and was the nucleus of the Buddhist teach­ings.

Among Buddha’s early converts was his cousin Devadatta who, sub­sequently broke away and founded a rival sect that sur­vived in parts of Oudh and western Bengal till the Gup­ta period.

The Buddha is said to have died at the age of 80 at Kusinagar, modern Kasia in the Gorakhpur district of Uttar Pradesh.

As per Buddhist teachings, salvation is pos­sible through the Eight­fold Path, which consisted of eight principles of action, leading to a bal­anced, moderate life (right views, resolves, speech conduct, livelihood, effort, recollection and medita­tion, the combination of which was described as Middle Way).

The doctrine of kar­ma was essential to the Bud­dhist way of salvation.

Unlike the brahmanical idea, karma was not used to explain away caste status, since Buddha rejected caste.

Buddhism was athe­istic, in as much as God was not essential to the Universe, there being a natural cosmic rise and decline.

The acceptance of nuns in the Buddhist monas­teries was a revolutionary step from the point of view of the status of women.

Shortly after the death of Buddha a great Council (Sangiti) was held at Rajagriha to compile the religious doctrine (Dharma) and the monastic code (Vinaya). A second council was convoked a century lat­er at Vaishali which con­demned the rules in respect of the ten points and revised the scriptures.

A fresh condemna­tion of heresy took place during the reign of Ashoka, under whose patronage a third council was sum­moned at Pataliputra by a learned monk, Tisaa Mog­galiputta, 236 years after Buddha’s death.

The fourth council was held under Kanishka which prepared elaborate commentaries (Upadesh Shastras and Vibhasha Shas­tras) on the sacred texts.

According to Sri Lankan tradition, the sacred texts and commentaries were written down in books in first century B.C. during the reign of King Vattaga­mani Abhaya. Later, the texts, as distinguished from the commentaries, came to be known as Pali.

Thank you for reading the History of Jainism and Buddhism. Read here more about Indian History.