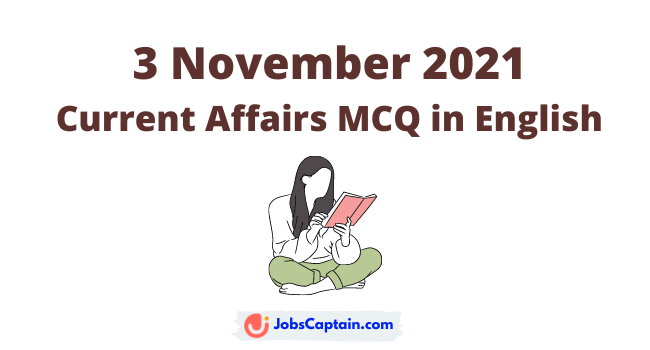 Here are Today’s Current Affairs and Headlines by JobsCaptain for November 3, 2021.

Question: Which bank has partnered with NPCI to launch Rupay Credit Cards ‘Veer’ for Armed Forces?

Question: Indian Railway Catering & Tourism Corporation Limited (IRCTC) has partnered with which of the following to provide passengers with greater trust in communication?

Question: Narendra Singh Tomar inaugurated “Apple Festival” in which of the following State/UT?

(A) Andaman and Nicobar Island

(B) Jammu and Kashmir

View Answer
(B) Jammu and Kashmir

Question: The Union Minister of Cooperation Shri Amit Shah launched the “Dairy Sahakar” scheme. The total outlay of the Dairy Sahakar scheme is ________.

Question: Microsoft has taken over which company to become the largest company by market cap?

Question: Asgar Afghan has announced retirement from all forms of cricket. He played for which country’s national cricket team?

Question: Who among the following has agreed to spend $6 billion to solve world hunger if the UN shares a spending plan?

Question: What is the Oxford English Dictionary’s 2021 Word of the Year?

Vax derived from the Latin word vacca, which means cow. Vax is used as a short form for vaccine and means a substance put into a person’s body to prevent them from getting a disease.

(A) Yantar Shipyard in Russia

The ship has been formally named as Tushil, a Sanskrit word that means protector shield. The ship has been developed under the InterGovernmental Agreement (IGA) between India and Russia in 2016 for the construction of four additional P1135.6 class ships for Indian Navy.

Question: Which edition of ‘Ganga Utsav 2021 – The River Festival’ begins?

The 2021 event has been organised under the leadership of Union Minister for Jal Shakti, Shri Gajendra Singh Shekhawat.

Question: Who has become the first player in the world to take 100 wickets in T20 International cricket as the fastest (53 matches)?

Question: Who has been appointed by the US Senate as the director of the National Drug Control Policy?

Question: Who among the following has been appointed on the Board of Trustees of the prestigious Smithsonian’s National Museum of Asian Art?

• The appointment is for 4 year
• Antoine van Agtmael is the chair of the museum’s board of trustees.
• The museum collection of Asian art includes more than 45,000 objects, dating from the Neolithic period to the present, originating from the ancient Near East to China, Japan, Korea, South and Southeast Asia and the Islamic world.

India’s Chief Election Commissioner (CEC) Sushil Chandra led a three-member delegation to Uzbekistan to oversee the country’s presidential election. Uzbekistan’s President Shavkat Mirziyoyev got over than 80% of the vote in the elections and was re-elected for a second fiveyear term.

Question: Which country will host Conference of Parties (COP-26) on climate change?

Addressing the COP26 Glasgow Climate Summit held in Scotland, Prime Minister Narendra Modi has said that India will reach net-zero carbon emission by 2070. PM Modi stressed on a five-point plan or ‘Panchamrit’ to fight the devastating effects of global warming and climate change.