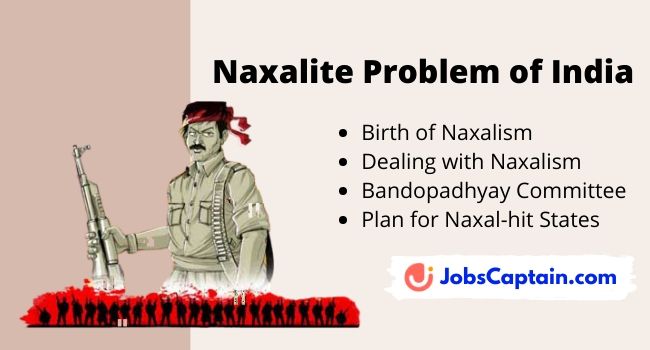 Today, the Naxalite problem is ‘the single largest threat to India’. Let’s start reading about this Essay.

Largest number of domestic terrorist organisations in the world are in India. The footprint of the Naxalites has spread till India’s capital New Delhi, as also the forest and hilly areas of northern States

The Naxalite movement has moved from rural, armed struggle and penetrated the domains of policy makers, media, judiciary, human rights, youth organisation etc. For the time being, the urban units are not indulging in violence. However, one never knows when their strategy might change and they start popping guns in urban landscape too.

According to a confidential military intelligence reports, India’s 231 districts in 13 States, including three in the NCR, are now being targeted by the Maoists to achieve their ultimate aim—seize power in Delhi by 2050. There is also a move to unleash psychological wars through effective networking of various friendly groups in the urban areas.

The dreaded ‘Red Corridor’, also known as the Dandekaran Belt, comprising of around 170 districts, is reeling under the Maoist terror. It runs through the dense forest and tribal belt, from Nepal through Bihar, Jharkhand, Odisa, Chhattisgarh, Madhya Pradesh and Andhra Pradesh, to some parts of Maharashtra and Karnataka. The dense jungles of Bastar region of Chhattisgarh are the centre of gravity of the Maoists. In fact, the Chintainer area in In southern Bastar has been declared as the capital of their Dandekaran State. Inside the corridor, the Naxalites run a parallel government in many areas.

According to the latest Central intelligence reports, the Maoists are now in the process of identifying ‘new operational areas’ across the country. The Special Economic Zones (SEZs) are being looked as easy targets to spread their violent agitation against the State.

A secret red book, ‘Strategy and Tactics of the Indian Revolution’, which is said to be the Bible of Naxals says: “The central task of the revolution is seizure of political power through protracted People’s war.” It further says: “Lakhs of enemy’s armed troops have been deployed since long in J&K and the north-eastern States. More and more nationalities may come into armed confrontation with the reactionary Indian State, so it will be difficult for the Indian ruling classes to mobilize all their armed forces against our revolutionary war.”

On March 2, 1967, an incident in a remote village of Naxalbari in West Bengal gave birth to the Naxalite movement in India and transformed the history of the left-wing extremism. The local landlords attacked a tribal youth named Bimal Kissan when he went to plough his land after obtaining a judicial order. This resulted in a chain reaction by the Tribal people of the area who started to forcefully recapturing their lands.

The situation turned into a rebellion, which left one police sub inspector and nine tribals dead. It took the United Front government in West Bengal 72 days to contain the rebellion and all repressive measures possible had to be used.

The incident got support from the cross section of Communist revolutionaries, resulting in the formation of the All India Coordination Committee of Communist Revolutionaries (AICCCR) in May 1968. ‘Allegiance to the armed struggle and non-participation in the elections’ were the two cardinal principles that the AICCR adopted for its operations.

The Naxalite movement became very popular in late 1960s and early 1970s. Many brilliant students from IITs and other colleges joined the struggle for the rights of the landless and tribals. However, the euphoria did not last for too long and, as the principles diluted, the membership and support to the movement started to wane. But, over a period of time, very little was done by the governments of the day to improve the condition of the landless and poor. This kept the Naxalite movement alive and kicking.

The Maoists ultimately were successful in turning a protest movement against police accesses into a violent political movement due to the inability of both State and Central governments to take effective counter measures and to address the genuine grievances of the oppressed people. The Maoists also exploited the hesitation of the governments of India and West Bengal to strongly act against them due to political considerations.

While at first glance the Naxalite movement and terrorist movements look alike, there is a vast difference between the two. The jihadi terrorism is primarily an urban phenomenon, motivated and supported by external forces. On the other hand, Maoist terrorism is a rural phenomenon motivated by domestic political agenda and grievances. The Maoist leaders are primarily motivated by their desire to seek political power through a People’s War.

Had the Indian authorities focused on developing the tribal areas and taken note of their genuine grievances the Naxalite problem would not have taken birth. Even now, in order to stop the spread of the Naxalite movement, steps are needed to rapidly develop the areas which are not yet effected by Naxalites.

In the Naxalite effected areas, it is important that rural police is modernized, sensitized to the problem to deal with the people in a sympathetic manner and strengthened to meet the challenge. Even the intelligence gathering in rural areas effected by Naxalism need to be strengthened. The administration also needs to be geared to hold a prompt inquiry into all allegations.

There is also an urgent need to develop the road network as that will be very helpful in effective and fast deployment of security forces. Steps also need to be taken to protect the security forces against land-mines and surprise ambushes.

Unfortunately, while dealing with the problem, the focus of the government is to militarize the counter-insurgent measures. Political handling has to go hand-in-hand with security operations. This is not happening, with a result the problem is getting out of control.

The Planning Commission had appointed an expert Committee in May 2006, headed by D. Bandopadhyay, a retired IAS officer instrumental in dealing with the Naxalites in West Bengal in the 1970s. According to this Committee, the political, social, cultural and economic discrimination faced by the oppressed people across the country has been a key factor that draws them towards the Naxalites. Lack of empowerment of the local communities was cited as another reason. “We have two worlds of education, two worlds of health, two worlds of transport and two worlds of housing…”

The faulty system of land acquisition was also shown by the report to be largely responsible for the support enjoyed by the Naxalites. The report pleaded forceful that small and marginal farmers should be enabled to lease-in land with secure rights, and landless poor occupying government land should not be treated as encroachers.

It was the first time that government appointed committee put blame on the State for the growth of Naxalism in India. Among the major reasons cited by the report was lack of good governance in the effected areas.

A holistic approach is required when dealing with the problem of Naxalism. The development initiatives have to be the integral part of the security steps.

As on year 2019 report, 90 districts in 11 States are considered as affected by Naxal.

The government has so far spent hundreds of crores of rupees trying to better defend and economically develop Naxal-affected areas.

Under a Rs 500 crore fully Center-sponsored scheme, the governments of the Naxalite-hit States will be given Rs 135 crore a year to deal with the Naxalite problem. (year 2015-2016)

Among the five major objectives of the scheme are: Steps to improve existing road infrastructure, especially in inhospitable areas, to provide proper mobility to the security forces; steps to build helipads and camping grounds in strategic areas, especially those in remote areas; steps to identify high risk police stations and strengthen them; steps to take holistic anti-naxal measures in a focused manner.

Many scholars advise that the administrators should take a cue from the successful land reforms in Kerala, and to some extent in West Bengal, that have helped to reduce tension in the rural areas and have also helped in undermining the Naxalite movement.

On the other hand, failure to bring land reforms in States like Andhra Pradesh, Chhattisgarh and Bihar converted a simple peasant struggle into a militant Naxalite movement. A thorough look at the socio-economic factors that contribute to the rise of militant movements is a must.

If you have any query regarding Naxalite Problem of India or want to add something in this, please do comment below.