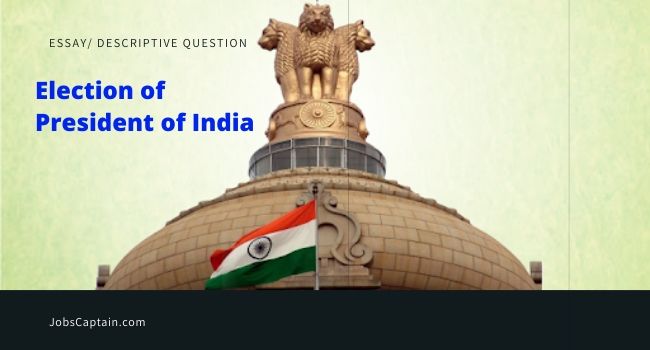 Today Essay or Model Descriptive Question of General Awareness Paper of UPSC Civil Services Mains Exam is given below.

Election of President of India

Article 54 provides that the President of India shall be elected by an electoral college consisting of the elected members of both the Houses of the Parliament and such members of the State Legislative Assemblies. As per subsequent amendments to the Constitution, the Assemblies of the National Capital Territory of Delhi and Union Territory of Puducherry were also included in the electoral college, while other Union Territories are not its part. Nominated members of the Parliament, as well as those from the State Legislative Assemblies are not authorised to vote.

It is also provided that the election to the office of the President shall be held by means of single transferable vote. Every voting member of electoral college has as many preferences as there are number of candidates in the fray. If there are more than two candidates in the race, the successful candidate must obtain 50 per cent plus one votes.

[Election of President of India]