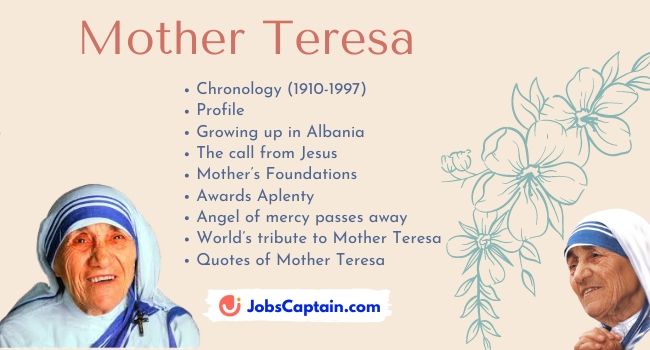 Angel of mercy, Mother Teresa, served God among the poorest of poor for 50 years. Many saw the Nobel Prize winner as a “living saint”. On her death on September 5, 1997, Prime Minister of India, I K Gujral expressed sorrow over Mother Teresa `attaining her place in heaven’. He said, “We in India are fortunate that the Mother chose to make Calcutta the base for her world-wide mission of mercy and compassion.”

Mother Teresa had said, “The other day I dreamed that I was at the gates of heaven. And St Peter said, ‘Go back to earth. There are no slums up here.'”

Growing up in Albania

Born on August 26, 1910, in Skopje in Macedonia, Agnes Gonxha Bojaxhia was the youngest of three children of an Albanian family. As she was pink and plump, her brothers and sisters fondly called her “Gonxha” (flower bud). From childhood the children were taught the lessons of charity. Agnes liked to be in church, reading, praying and singing.

When she was quite young, she felt the desire to spend her entire life for God and His work. For this decision, she was helped by a father to whom she confessed her desire. At the age of 18 she joined the Loreto Sisters who were very active in India. She was trained in religious activities. She choose the name Sister Teresa. In 1929 Sister Teresa was assigned to teach at the St Mary’s Convent School in Calcutta, India.

The call from Jesus

While working, whenever she used to find time, she used to look after the sick. On May 24, 1937, she took her final vows as a nun in Darjeeling. Her journey to Darjeeling in September 1947 was, perhaps, the most important journey of her life. Here she heard God’s voice — the message was “to leave the convent and help the poorest of poor and to live with them.” She said it was an order and had to be obeyed.

At first she did not get the permission to leave the convent but in 1948 she got the permission specifically from Pope Pius XIII to leave the the Loreto community and work among the city’s poor. Since then, she has remained a guardian angel for the sick and dying the world over. She chose to wear the plain white sari with the blue border and a simple cross pinned to her left shoulder.

Mother’s Order, founded in 1947, has nearly 4000 nuns running orphanages, homes of poor, AIDS hospices and other charitable centres around the world.

In 1948, she opened the first school for slum children in Calcutta. She used to help the poor and taught them about hygiene. In 1952, she opened Nirmal Hriday (or Pure hearts), a home for the dying. On the very first day, Mother Teresa picked up a woman literally half-eaten by rats and ants and carried her to the home and cleaned her. This Home for Dying became more and more popular where the dying who had no place to go were brought and were given proper medical treatment.

Another of Mother’s foundations was Shishu Bhavan — the home for babies. Children whose parents cannot care them, or whose parents have left them on the streets.

Mother Teresa also started a colony for lepers where they could build their own houses and could work on their own fields. The colony was called Shanti Nagar. The biggest problem, according to her, was not the disease but the lack of love and charity, the feeling of being unwanted.

Mother considered abortion as the biggest evil. On abortion she said that:

For the care she took of destitutes, physically and mentally handicapped, lepers, slum dweller, the world community bestowed on her numerous awards.

In 1962, Mother received her first award for humanitarian work — Padmashri award. In the same year, she got the Ramon Magsaysay Award. In 1971 Mother was awarded with Pope John Peace Prize. After being awarded the Noble Peace Prize in 1979, the “living saint” said “I accept it in the name of the poor because I believe that by giving me this prize, they are recognising the presence of poor in the world.” India’s highest decoration Bharat Ratna was conferred on her in 1980.

In 1990, Mother had decided to step down as a head and so called a conclave of sisters to choose a successor. But in a secret ballot, she was reelected with one dissenting vote — her own. And so finally she withdrew the request to step down. In 1996, her health started deteriorating, with failure of her left ventricle, recurring heart problems, chest infection, and so again wished to step down. Finally on March 13, 1997 Mother stepped down and paved the way for election of Sister Nirmala as the new head of the Order.

Angel of mercy passes away

The 87-year old Nobel laureate died of severe cardiac arrest at the Missionaries of Charity headquarters on September 5, 1997 at 21.30 hours. With the death of “Saint of Gutters”, the light has gone out of the lives of the poor and the downtrodden.

Mother herself had no personal property or savings. But her real wealth was the millions of destitutes orphaned and abandoned sufferers around the world. In all her work both in India and abroad, she adopted the Indian tradition in service.

Prime Minister of India, IK Gujral, said, “The Mother is a worshipper of daridranarayan (poor). Gandhiji and Mother in this century demonstrated to us the beauty and power of this ultimate and most difficult form of worship.” He also said, “The world especially India, is poorer with her passing. Hers was a life devoted to bringing love, peace and joy to the people the world generally shuns.”

Vice-President of India Krishan Kant said, “With the death of Mother Teresa, a messiah of the poor has left us. The poor will feel poorer. This shock will sprout forth a fountain of love and compassion for the causes she served. She will remain a symbol of dedication and selfless service.”

The US President Bill Clinton said in his condolence message , “Mother Teresa and Princess Diana – the two different women of vastly different backgrounds and worlds — are gone, but each of them has shown us what it is to live a life of meaning through concern for others.”

Pope John II said, “She leaves us the testimony of the love of God that … transformed her life into a total gift to her brothers and sisters.” British Prime Minister Tony Blair paid tribute to Mother Teresa calling her a “inspiration to all of us”.

Mother Teresa remained firm in her vision of the world’s true needs: humble acts of mercy on God’s behalf.

I see God in every human being. When I wash the leper’s wounds, I feel I am nursing the Lord himself. Is it not a beautiful experience?

When a poor person dies of hunger, it has not happened because God did not take care of him or her. It has happened because neither you nor I wanted to give that person what he or she wanted.

I have never seen war before, but I have seen famine and death. I was asking (myself), ‘What do they feel when they do this?’ I don’t understand it. They are all children of God. Why do they do it? I don’t understand.”

“I realized that I had the call to take care of the sick and the dying, the hungry, the naked, the homeless – to be God’s Love in action to the poorest of the poor. That was the beginning of the Missionaries of Charity.”

“When He was dying on the Cross, Jesus said, ‘I thirst’. Jesus is thirsting for our love, and this is the thirst of everyone, poor or rich alike. We all thirst for the love of others, that they will go out of their way to avoid harming us and to do good to us. This is the meaning of truest love, to give until it hurts.”

Thank you for reading article on “Mother Teresa”. If you have more information on great personality Mother Teresa, than do comment below.