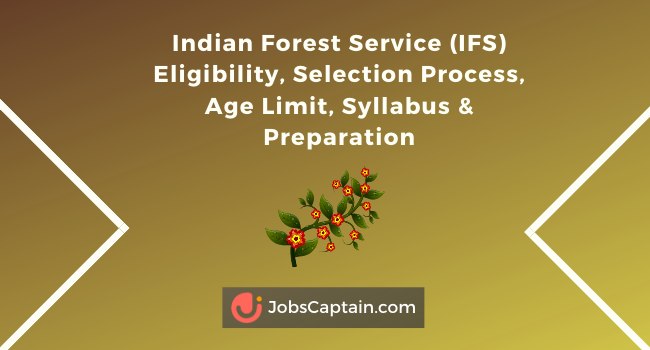 Indian Forest Service (IFS), offers a highly challenging and rewarding career. It offers an exciting opening where an IFS officer not only acts as custodian of forests under his area of responsibility but also derives mundane pleasure of being instrumental in protecting and preserving the environment and wild life.

This exotic satisfaction of protecting forests, environment and wild life also adds a lot of adventure to the job.

Recruitment to this service is done by the Union Public Service Commission (UPSC) through a competitive examination every year. The candidates selected for the service are allotted a State/Union Territory cadre and they serve in that particular State/Union Territory thereafter till superannuation, except for a few deputations to the Central Government in between.

The service has inherent time-bound promotions and higher scales which are comparable to the best in government sector in the country. After completion of training, the IFS officers are usually posted as Divisional Forest Officers (DFOs)/Deputy Conservators of Forests (DCF) with the independent charge of a forest division with a large number of Forest Guards, Block Officers, Range Officers and Assistant Conservators of Forests working under them.

Some of the State Governments have State Forest Development Corporations also and the IFS Officers can also be posted as Divisional Managers, General Managers, Executive Directors and Managing Directors in these Corporations.

Thus IFS officers also get an exposure to the corporate functioning in the government sector, adding another dimension to their job. In addition, the IFS officers also enjoy certain powers of police officers in respect of several offences under the Indian Forest Act.

The candidates applying for the IFS examination must fulfill the following conditions:

The scheme of examination has two stages:

All the eligible candidates are first tested through a written examination which consists of two compulsory and two optional subjects. The compulsory subjects are General Knowledge and General English.

The compulsory papers are designed to test the candidates command over the language, comprehension, analytical power and overall general awareness. The General English paper carries the questions on use of words of common parlance, passages, precis, comprehension, idioms etc.

In addition the candidates are also required to write an essay out of a few given topics. The standard of this paper is such as is expected of an average science/engineering/forestry/agriculture graduate of an Indian University.

The second compulsory paper on General Knowledge is aimed at testing the general awareness and knowledge of the candidates in subjects other than those studied by them in their academic curriculum. This paper also tests the knowledge of candidates on current events of national and international importance.

There are a few questions on Indian Political System, Indian History, Economy, Geography and applied aspects of Science and Technology. The standard of this paper is again such as is expected of an average science/engineering/forestry/agriculture graduate. The questions in this paper are multiple choice objective-type in nature.

So far as the choice of optional subjects is concerned, list of subjects offers a vast choice. Every eligible candidate is usually expected to specialize in at-least one of the optional subjects which he/she would have offered during his/her academic degree.

The choice of second subject is also not difficult. It is recommended that the candidates appearing for the first time in the examination should go through previous question papers before finally deciding on the optional subjects. The standard of optional subjects is that of degree level academic examination.

Further details regarding syllabus of all optional subjects are available in the instructions received along with the application form supplied by the UPSC.

The main aim of personality test is to judge the suitability of candidates as officers of Indian Forest Service. The candidates appearing in the interview may expect some questions on common day-to-day observations and current affairs of importance.

Preparation and Coaching of IFS

The IFS being among the most prestigious services of the country, the competition for examination is quite tough and needs meticulous preparation. So far as optional subjects are concerned, most of the students are expected to do well.

To have a sound base in the General Knowledge paper the candidates must refer to a basic and standard general knowledge book like “General Knowledge Refresher” by O.P. Khanna, regularly supported by “The Competition Master”.

This would keep the candidates posted upto date as far as general knowledge and current affairs are concerned and would give them an edge over others in this paper.

Similarly, the personal interview also requires an exhaustive preparation. Passing of written examination must not lead a candidate to a state of complacency. Personality test being the final test of suitability of the candidates for the service, thus assumed greater importance.

In depth study of all important aspects of general interest as well as brushing-up of optional subjects offered in the written examination is required. Thorough self-appraisal is also an effective way of preparing for the interview.

There are certain private institutions/agencies imparting coaching and guidance for IFS examination as well as personal interview. By taking due precautions for not falling into unscrupulous hands, coaching from a reputed institution will go a long way to help the fresh candidates to do well in this examination.

Thank you for reading Career in Indian Forest Service article, If you want any more information, please do comment below.