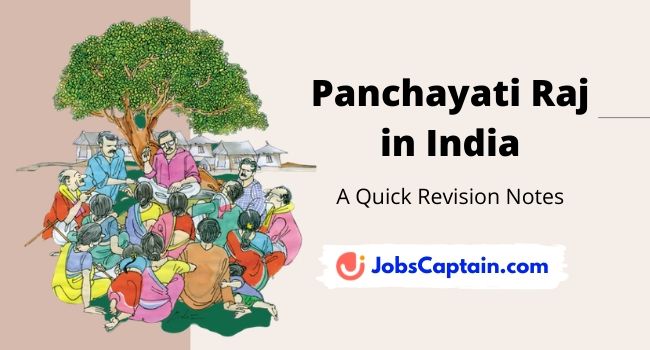 Today we quickly discuss about “Panchayati Raj in India”.  Let’s start reading Essay on it.

In the original Constitution of India, under Article 40, there was just a directive to take steps to organize village Panchayats and delegate them with appropriate powers to allow them to work as units of self-government.

However, the said Directive was not taken very seriously by the political powers and Panchayti Raj in India could not be institutionalized.

Essay on Panchayati Raj in India

In 1993, the 73rd Constitutional Amendment Act was passed that gave a Constitutional status to the Panchayati Raj institutions. The Act also withdrew the discretion that the State governments had in matters of several important matters related to functioning of PRIs.

A three-tier system of PRIs was introduced by the Amendment introduced across the board three-tier system of the PRI—at village Panchayat, Block and District levels. The electorates at Gram Panchayat level, named as the Gram Sabha, elect the representatives to Gram Panchayat by way of direct election. The amendment, under Article 243D, provides for reservation of seats for Scheduled Castes (SCs), Scheduled Tribes (STs) and women at all levels. Reservation for the SCs/STs is as per their actual proportion in population of the concerned area, and for women is one-third of the total seats in all the tiers.

The term of PRIs has been fixed at five years. Besides, the Act empowers the States to allow the PRIs to levy, collect and appropriate several tolls and taxes in their respective legislative areas. It is also mandatory for the State governments to appoint a State Finance Commission to review the financial position of the PRIs and make recommendations with regard to the distribution of net proceeds of taxes between the States and the PRIs, assign certain taxes exclusively to the PRIs and determine the grants-in-aid.

The responsibility of preparing micro-plans for the economic development at Panchayat-level has been given to PRIs by Articles 243G and 243H of the Amendment Act. The PRIs are also responsible for exercise of powers in respect of developmental items—irrigation, land improvement, fisheries, animal husbandry, women & child development etc.— as prescribed by the Eleventh Schedule of the Constitution.

While the States can determine proportion of reservation for SC/STs, as also providing reservation to Other Backward Castes (OBCs), they have no discretion to reduce the prescribed reservation to women (not less than one-third of the seats). This has resulted in people belonging to the backward and the vulnerable sections, including the women, occupying almost 50 per cent seats in the PRIs, resulting in their actual empowerment.

The flow of funds for economic development is based on District, Block and Panchayat-level plans prepared by the PRIs. As the PRIs have the power to level many taxes this helps them to become self-reliant and financially empowered.

The biggest stumbling block in achieving the desired results from Panchayat Raj system is high percentage of illiteracy, especially among the women. On top of this, many female representatives do not feel at ease to visit the government offices for various works and delegate the work to the male members of their family, thus defeating the very purpose of providing women reservation.

Many State governments have failed to delegate the powers and functions to the PRIs in the true spirit of the law, due to the reluctance on part of the bureaucrats, MLAS and the ministers to share powers and authority. The objective of complete empowerment of people and women at the village-level continues to remain half-fulfilled in many States.

PRIs also face the problem of inadequate manpower to help them effectively discharge their functions. Till the State governments work to put in a mechanism to ensure appropriate manpower availability to the PRIs the objectives of the 73rd Constitution amendment will not be fully achieved.

The approach paper to the 10th Five-Year Plan had observed that the excessive controls over the PRIs had been a major impediment to their efficacy and had proved to be counter-productive. The approach paper recommended: (i) Abolishing of the Block-level or District level tier as a step towards reduced control; (ii) holding of Finance Commission funds and other development funds to States who fail to delegate the required power to the PRIs; (iii) increase of accountability of PRIs by strengthening of their financial management and audit procedures, as also by providing required orientation to the elected representatives The strategies proposed by subsequent Plans have also revolved around the same lines.

Thus, it can be safely concluded that policy makers at the highest level are fully aware that the goals of empowerment have not been met much more needs to be done to achieve the desired goals. The situation is not hopeless and there are many success stories to quote from. Wonderful jobs have been done by many women and SC/ST representatives. No doubt, some procedural and legislative changes are required, but what is needed the most is attitudinal change.

Thank you for reading about “Panchayati Raj in India”. Read Here more about India Constitution in Hindi.

If you have any query regarding Panchayati Raj in India, please do comment below.