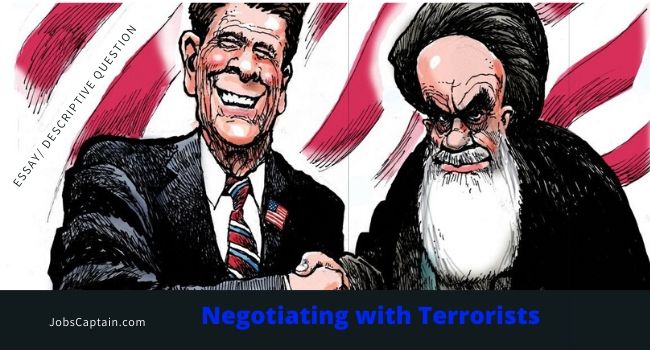 Today, we are come with interesting and important topic for civil services examination. Here we discuss about essay or descriptive question “Negotiating with Terrorists”.

Let’s read about Negotiating with Terrorists is good or bad.

Ans. Scholars and policymakers who are against engaging in negotiations with terrorists argue that talking to them only serves to incite more violence and weaken the fabric of democratic States. In 2003, US President George W. Bush declared: “You’ve got to be strong, not weak. The only way to deal with these people is to bring them to justice. You can’t talk to them. You can’t negotiate with them.”.

UK Prime Minister Margaret Thatcher had also vowed never to negotiate with terrorists. President Vladimir Putin of Russia was quoted by Pravda newspaper as saying: “The universally recognized method of fighting terrorism is denying any negotiations with terrorists because any contact with them encourages committing new, bloodier crimes.”

Scholars like Wilkinson, Ward-law, Alexander, Narveson, Weinberg & Davis, and Neumann also argue that “negotiations on the underlying political demands of terrorists are unlikely to resolve the conflict and may simply incite more terrorism.”

If we look at the assumption from a purely strategic point of view, we find that it is suicidal to publicly negotiate with terrorists. However, according to Zaki Djemal, a social study concentrator, “negotiating with terrorists is not a matter of principal but rather a matter of strategy ….. governments would be wise to acknowledge the fact that in these complex situations one size simply does not fit all.”

Despite grand declarations, most democratic nations — USA, Israel, India — have negotiated with terrorists. A cost-benefit analysis many a times makes a government realize that benefits of negotiating surpass the cost. On many occasions too many lives are at stake.

There is example of Ireland, and States of Punjab and Mizoram in India, where negotiations did help to bring in peace. On the other hand, in case of hijack of Indian Airlines flight to Kandhar, Indian authorities negotiated and released three hardcore terrorists to save 200 lives which, in turn, resulted in more terrorism related violence hitting India.

Dr Amy Zalman is of the opinion that proponents of negotiation begin with the premise that neither party can “win” their battle in any meaningful way. However, “the high stakes — the potential that generations after ours may inherit an inordinately expensive conflict, in lives and resources, that cannot be won — make it worth exploring the possibility of diplomatic or political solutions.”

As per “Negotiating with Terrorists: A Mediator’s Guide” of International Institute for Applied Systems Analysis, “the main objection to negotiation with terrorists is that it encourages them to repeat their tactics. But it is not negotiation per se that encourages terrorism but rather the degree to which they are able to achieve their demands by negotiation.

What needs to be considered is: whether negotiations with terrorists can help in solving the problem and bring viable peace. The process has to keep in mind the fate of the peace process as a whole, not just the fate of the proscribed group.

The Bottom Line [Negotiating with Terrorists]

It is true that negotiating with terrorists can lead to their legitimation. However, it also offers an alternative and a chance to broker peace. The transformation of some movements are examples of successful negotiation process. Even in the State of Nagaland in India, where no concrete solution has been found yet, the continuing negotiation process has prevented violence. Of course, negotiations are not always possible. Cases of hijacking, kidnapping, etc need a strict no-negotiation policy, as negotiation in such cases has been found to show the governments as weak and even led to escalation in terrorist activities (case in point is Indian Airlines hijacking). In case of Israel and Hamas, negotiations have failed because the “objectives of Hamas require destruction of the State of Israel,” which is non-negotiable.

Negotiations will not be fruitful in all cases. Still they can not be ruled out and have a history of success or even partial success. It is thus safe to label the assumption as partly true.

Thank you for reading essay/model descriptive question on “Negotiating with Terrorists”. Read her more Essay or Model Descriptive Questions with Answer.

One thought on “Negotiating with Terrorists – Essay/Model Descriptive Question”