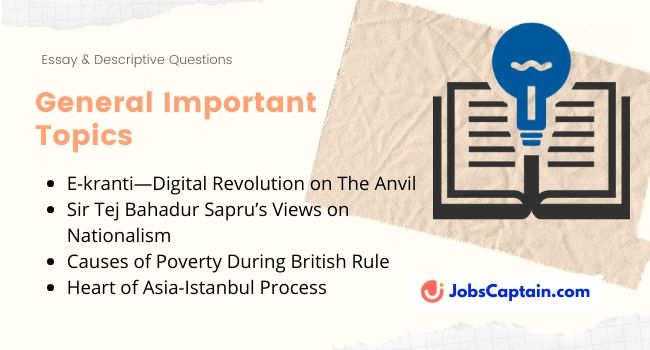 Below given Finance and Indian Economy related Topics/Questions are helpful in you Banking Exams and UPSC Civil Services Mains Exam or any other competitive examinations.

E-kranti—Digital Revolution on The Anvil

Question: Write a short note on the Union government’s plan to usher in a digital revolution in India.

Ans. The Union government is gearing up for its next big mission, a ₹113,000-crore plan that aims to usher in a digital revolution by moving everything online, from education to public services to bureaucracy.

Aptly called ‘e-kranti’, it comes under the Narendra Modi government’s ‘Digital India’ initiative and is quite simply the world’s most ambitious broadband project — but one that will have to overcome countless hurdles, big and small. It seeks to provide digital access to all citizens, from the rural and elderly to the poor.

The aim is to move governance online, and for that bridging the so-called digital divide is essential. The government  aims to expand its rural internet coverage to 250,000 villages by 2017, from the existing 130,000. In two years, 150,000 post offices will be transformed into multi-utility centres (providing a range of government services, banking for instance, and not just postal services). Some 250,000 government schools will get broadband and free WiFi and all schoolbooks will have e-versions.

The digital drive is also integral to the government’s plan to create 100 smart cities. Under the plan, all cities with a population of more than a million will get public WiFi hotspots. All government communication will move to a universal secure email client.

Ans: Tej Bahadur Sapru was an eminent lawyer, nationalist and social leader during the British rule in India. Born in 1875 in Aligarh (U.P.) in a Kashmiri Brahmin family, Sir Sapru practiced as a lawyer in Allahabad High Court where Purshottam Dass Tandon was his assistant. He was a known moderate leader and subscribed to the views of Gopal Krishan Gokhale. He was the jurist leader of the Indian Liberal Party and favoured a dialogue with the British government rather than confrontation. He was a firm believer of self-government reforms and did not favour independence from the British rule, as he felt that the Indians were not ready for independence. In support of his views on the nationalism, just like other leaders like M.R. Jayakar, he was a regular participant in the provincial and central legislatures that most of the nationalists thought were only the rubber stamps of the Viceroy.

Sir Sapru was opposed to the methods and leadership of Mahatma Gandhi and strongly opposed the non-cooperation movement and salt Satyagraha. He however often acted as a mediator between the government and other nationalist leaders. He was instrumental in getting the Gandhi-Irwin Pact settled, negotiating the end of salt Satyagraha and forging the Poona Pact between Mahatma Gandhi, Dr Amdedkar and the British government. He was very active during Round Table Conferences in 1931-33 and was an informal spokesman of liberal views on Indian nationalism.

He was knighted by the British government in the year 1922. It is however, an admitted fact that his Liberal Party lacked popular support of the people and was more of a group of intellectuals who continued to practice nationalism as per their own thoughts, without caring for the popular sentiments and feelings.

Causes of Poverty During British Rule

Question: What were the causes of poverty and famines in Indian society during the British rule? Also assess the role of British government in mitigating the misery of the suffering millions.

Ans: The British had primarily come to India to pursue their trade and economic interests. Right from the days of East India Company, the British followed such economic policies as led to rapid transformation of Indian economy into a colonial economy, whose nature and structures were determined by the needs of British economy. In other words, Indian economy was driven into a situation of producing cheaper raw materials to meet the requirements of industry in Britain. While the Indian agriculture was forced to serve the interests of the British industry, there was almost complete dependence of Indian economy on the finished goods produced in England. Hence, there was a double drain of India’s wealth to Britain —firstly in the form of cheaper raw material being exported out of India and secondly in the form of import of finished goods from England into the country.

The British policy not only kept the Indian economy poor, but also blocked the way for systematic development of modern industry in India. With liberal and duty-free access to the British imports, the traditional artisans and craftsmen in India were also ruined. Once Railways were built, British manufactured goods made inroads into the hinterland of the country and ruined such workmen even in the interior rural areas.

The condition of the peasantry was no better. While the rates of agricultural produce were low and a large majority was engaged in contract farming at low remunerations, the demands of land revenue were huge. Even in the years of low yields, the land revenue demands were not toned down. As a result, the poor farmers were left with very little to feed their families. Many of them plunged into debt with the traditional moneylenders who gradually grabbed their lands and the poor peasants ended up working as hapless agricultural labourers on their own lands.

During the centuries of economic exploitation, the drain of Indian wealth was so high that the agrarian society of India was pushed to the verge of starvation. The poverty of the people culminated in various famines in the country. Earlier famine occurred in U.P. in 1860-61, that took a toll of over two lakh lives. It was followed by a severe famine in 1865-66 in the areas of Orissa, Bengal, Bihar and Madras in which almost 20 lakh people perished. Again, more than 14 lakh people died in the famine of 1868-70 in western U.P., Bombay, Rajputana and Punjab. Even more severe famines followed in the years 1876-78, 1896-97 and 1899-1900 in which more than one crore people died—a phenomenon that is unthinkable today. The series of famines continued in the twentieth century also and the last in the series was the great famine of Bengal in 1943 in which almost 30 lakh people died of starvation.

Though extreme poverty in India caused by the policies of economic exploitation of the British was mainly responsible for such a large number of deaths, the British government hardly took any serious action to make available the food grains in the affected areas. Zamindars were rather busy in recovering their share of land revenue from the famine-affected population. Though it was in the knowledge of the British that a large majority of Indian peasant families lived mostly on one meal a day, yet no effective steps were taken by them to overcome the plight of poor people in a resource rich country.

Question: Write a short note on Heart of Asia-Istanbul process.

(a) Political consultation involving Afghanistan and its near and extended neighbours;

(b) A sustained incremental approach to implementation of the Confidence Building Measures (CBMs) identified in the Istanbul Process document; and

(c) Seeking to contribute and bring greater coherence to the work of various regional processes and organizations, particularly as they relate to Afghanistan.

All participating countries and international and regional organizations anticipate that confidence building measures identified in the Istanbul Process document contribute to the building of trust and confidence among the regional countries.

The Istanbul Process emphasizes on the important role of existing regional organizations, and intends to support and strengthen their efforts in promoting economic cooperation and integration in the region, improved security, and greater people-to-people relations. The Istanbul Process is not intended to substitute the existing efforts of regional organizations, but to cooperate with them, and complement their work where necessary, particularly where they relate to Afghanistan.

Heart of Asia fourteen member-countries are supported by 16 other countries and 12 regional and international organizations. The member countries are: Afghanistan, Azerbaijan, China, India, Iran, Kazakhstan, Kyrgyzstan, Pakistan, Russia, Saudi Arabia, Tajikistan, Turkey, Turkmenistan and the UAE. The United States, Japan, Egypt, the United Kingdom, France and Germany are among the supporting countries, while the UN, NATO, SAARC, SCO and OIC are among the supporting organizations.

The first conference was held in Istanbul in Turkey in 2011 — from where the process gets its name. Second meeting was held in Kabul, Afghanistan, in 2012, followed by Almaty, Kazakhstan in 2013, and Beijing, China, in 2014. The 2015 meet, the fifth, was co-hosted by Pakistan and Afghanistan, and held on December 8-9 in Islamabad.

India is the lead country for Trade, Commerce and Investment Opportunities, and has hosted six regional technical group meetings on trade, commerce and investment opportunities for Heart of Asia, between 2012 and 2015.

The fruits of economic growth have not benefited everyone uniformly. Some are left behind and some others are not touched by the benefits of economic growth. It is proved globally that the so-called trickle-down effect does not work in all the societies and India is no exception to this. There are various reasons for this uneven development in the society. Modern economy is technology driven and not labour-intensive.

High volume of high quality goods and services are produced with fewer labour hands. In short, the modern economy is not generating much employment and sometimes it displaces and replaces labour with machines and tools. The period of 1999-2000 to 2004- 2005 saw rapid economic growth in the country but it has not impacted on the unemployment problem of the country. During this period, the unemployment rate remained almost same for rural males and decreased by just one percentage for urban male. On the other hand, unemployment among females increased by one percentage for urban and rural females.

One-third of the country’s population is still illiterate and a majority are not educated up to the age of 15 years. Even among the educated, all do not have employable skills of the modern economy. The education system is not tuned to the changing economic scenario. The large agriculture workforce in rural areas is not sustainable with dwindling cultivable land and use of modern methods of cultivation. As a result, the rural labour is pushed into cities in search of work but they do not have any employable skills in the urban formal sector often end up doing odd jobs in urban areas.

Urbanization in this country is mainly due to acute poverty in rural areas, rather than due to the economic opportunities in urban areas. Further, poverty is not uniformly spread in the country. States like Odisa, Bihar and Madhya Pradesh have high level of poverty and the levels have not come down significantly in the post-economic reform era.

It is also pertinent to understand that some of the people are unable to be part of the economic reform and do not have the capacity to participate in the economic development process. Such groups need government intervention to ensure that they are not left behind in the development process and deprived of the benefits because they do not have the capacity to be part of the global economy. The government needs to develop safety nets for such groups and try to mainstream them in the development process. They need welfare measures in the form of poverty alleviation programmes to ensure that they survive, if not prosper, in this era of economic reform. Further, the poor are not a homogeneous population and their capacity to survive the economic reform varied from one group of poor to another. Especially, those who are below the poverty line or the poorest among the poor need more government help.

Above all General topics for upcoming main exam of civil services. These all topics are very important for UPSC or Banking Descriptive examinations.

You can read here more Essay or Model Descriptive Questions.

Thank you for reading. If you have any interesting topics related UPSC or Banking Exams, please do comment below, we sure share our expert views on your topics.